Skip to content
Several weeks ago, my blog about Seattle cobblestones generated a bit of interest so I thought I would follow up by discussing a few old cobblestone roads from Europe. I am using the term cobble a bit loosely, as technically it refers to a stone ranging in size between 64 and 256 millimeters. Furthermore, cobbles typically are rounded due to ice or water. In this context, a cobble is a stone used as a paving material.

My favorite are the gray cobbles used throughout Rome. Locals call the three-inch-square paving blocks, “San Pietrini,” little Saint Peters, playing on St. Peter’s role as the rock of Christianity. In his landmark De Architectura, or The Ten Books of Architecture, Vitruvius referred to the lava that made the stones as hard, enduring rock, calling it siliceae, or silex. 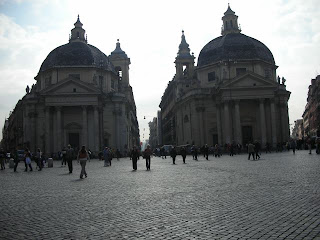 More exotic cobbles are found in Seravezza, one of the great localities for marble in Italy. It was here around 1519 that Michelangelo went in search of white marble for the façade he had designed for the church of San Lorenzo in Florence. The church was never built but Michelangelo did open up quarries still used at present. In the sidewalks of Seravezza, you can find a wide variety of the many colors of marble quarried in the Apuan Alps. 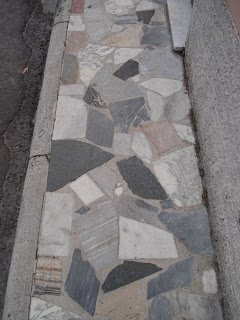 In the town of Volterra, about 30 miles southwest of Florence, are massive paving stones. Volterra is a classic Tuscan hill town with a history that stretches back to Etruscan times. The Etruscans built several gates, one of which remains and still has figures carved out of basalt, though much weathered. The well-worn roads are made of sediments rich in fossil shells, the largest of which are the size of a deck of cards. 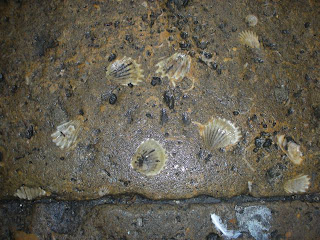 Shells in the road of Volterra
I have not visited my final site of European cobbles. I learned about it from Michael Welland, who writes the blog, Through the Sandglass. Here is what he had to say about the old French Mediterranean city of Narbonne. “Awe-inspiring, the oldest cobbles are the pavement of the great road of the Roman Empire (Narbonne was a major regional capital), the Via Domitia. This section of the road was uncovered not that long ago in the town square. This is really hairs-on-the-back-of-your-neck stuff as you gaze at the wear of traffic 2000 years ago.” He thought they were highly indurated marbles. 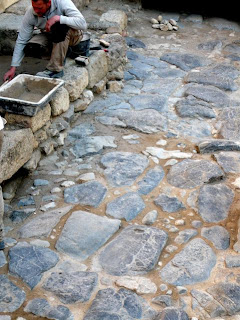