Last night, I watched a fascinating documentary about the iconoclastic architect Louis Kahn. As the title implies, My Architect: A Son’s Journey, follows Kahn’s son Nathaniel as he attempts to discover the father he didn’t know. Kahn was one of the greatest and most complex architects of the twentieth century. He is best known for his work in the United States, which includes the Kimball Art Museum in Dallas and the Salk Institute in La Jolla. He also designed astounding buildings in Bangladesh and India. What he was less known for was that he had three families, one with his wife and two through long-term affairs. All three produced children. The movie is well worth watching not only for Kahn’s fascinating life but also for his stunning architecture.
What I like best about his work is his use of geometric shapes. He punctuates his walls with angles and arches and circles, allowing an ever changing interplay of light and shadow. Each design brings the buildings to life as they change shape throughout the day. His use of geometric shapes also connects his buildings to the landscape, not necessarily in an organic way, but in a way that continues the weaving of the ephemeral and the permanent.
And finally, Kahn appears to have been quite the fan of travertine. His use of it at the Salk Institute foreshadows and seems to have inspired Richard Meier’s use of the stone at the Getty Museum. Below are some photos I found on the web that to me are some of the most notable uses of travertine. I hope you’ll agree. 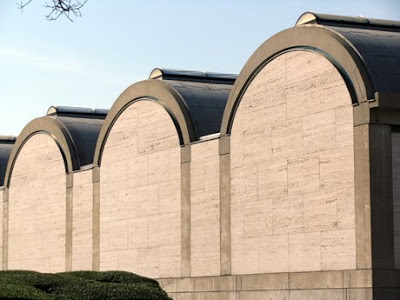 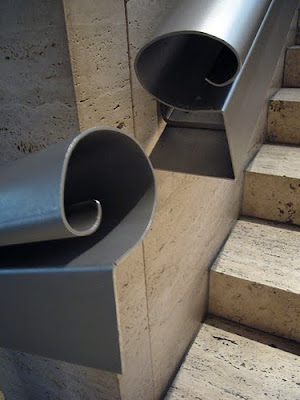 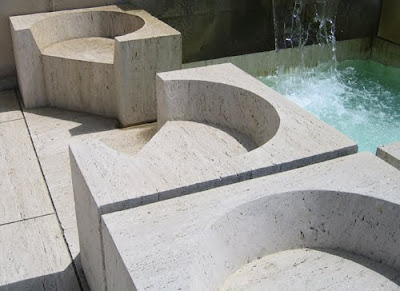 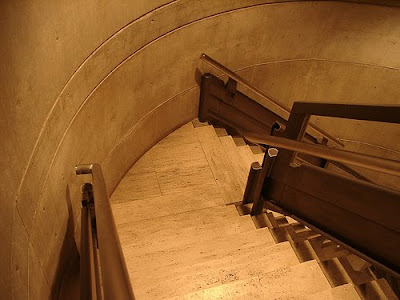