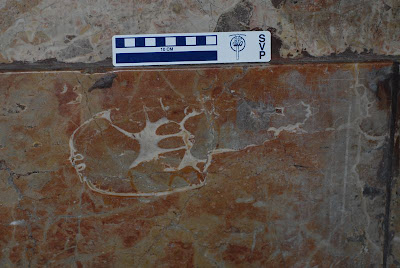 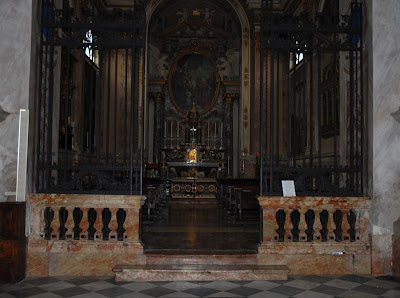 Judging from the fossils that I have seen at the Tucson Gem and Mineral show, ammonites once ruled the world. I have only seen one small section of the displays but ammonites are by far the most abundant group of fossils, numbering in the thousands. You can buy them individually, by the bag, and by the the pound. They range in size from less than an inch to four feet in diameter. 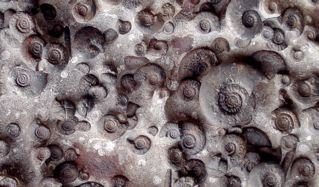 A gaggle of ammonites
They come from places as diverse as Morocco, Russia, Columbia, and Madagascar. Most are whole. Some are split in two, revealing mineralized chambers. Many have been polished. Others are pyritzed. At one display, in a hotel room, the ammonites have been mounted elaborately with wee ones glued to bigger ones and split with whole. I also saw one massive ammonite-choked chunk of rock from Morocco that had been drilled out to create a wine rack. 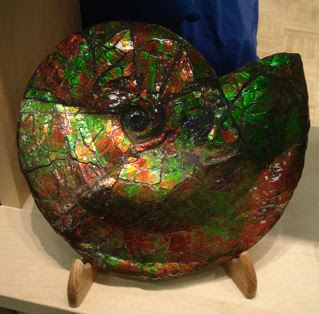 A rafter nifty specimen from Canada

I was lucky to see the massive four foot diameter specimens. They had sold to an undisclosed buyer from Austin, Texas. He had paid $9,000 in cash for two of the giants, both of which had been cut in half. According to the guys getting ready to box and ship the ammonites, one was going to the buyer’s home and one to a museum. 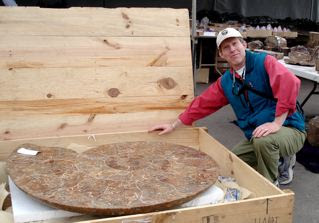 A boy and a very, very big ammonite

My only disappointment was in how little information was listed with the fossils. A handful had the scientific name, age, and locality, but most had nothing but price. Still the show of ammonites is impressive. 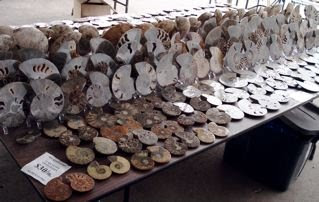 A table of ammonites from Madagascar