Skip to content
Tweets by geologywriter
Probably every geology-oriented person knows about Edward Drinker Cope and his well-financed, nasty battle with Othniel Charles Marsh but probably fewer know about his stone-fronted house in Philadelphia. Today, I aim to try and fix this sorry dearth of knowledge by focusing on said home. Like many aspects of Cope’s life, a bit of controversy surrounds it. 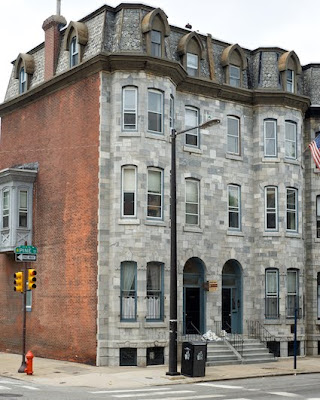 Cope owned two adjacent row houses, at 2100 and 2102 Pine Street. They are classic Second Empire with a mansard roof pierced with dormers and prominent projecting bay windows. He acquired the property in 1885 and initially lived around the corner. 2102 Pine served as his laboratory. The house sounds like a wonderful chaotic mess. His friend and biographer Henry Osborn once wrote:

“The first floor became a storeroom for boxes and cases. At the back of the second floor was Cope’s study and the editorial room of the American Naturalist [Cope purchased the magazine in 1877 and owned it until his death. During that time he wrote 776 articles. Ironically, Marsh’s uncle, George Peabody, had provided the money that funded the Peabody Academy of Sciences, where the magazine was initially published.]…This room always contained some of the more interesting fossils, which were brought in from the storeroom when Cope was working upon them. The front room on the second floor was entirely filled with shelves on which stood paper boxes, containing the smaller objects in Cope’s Permian and Pampean collections. On the third floor back was the preparation room, presided over by the genial Jacob Geismar…Around the floor of Cope’s study there always wandered a venerable tortoise. To the left of his study table was a vivarium, which contained a ‘Gila monster’.”

The controversy centers on exactly what type of stone clads the three-and-a-half-story row house about a mile south of the Academy of Natural Sciences. According to the nomination for the National Register of Historic Places, written in 1975, the house is faced “with a green stone peculiar to Philadelphia.” This would mean a serpentine, a stone first used in the early 1700s. Several local quarries provided the building material, which historian Berenice M. Ball wrote “suited the romantic architectural ideas of the late 1800s perfectly.”

I am not sure, however, what the person who wrote the nomination was thinking. All recent photos of the building clearly show that a white stone faces the house. (The building was not refaced, as you can see that the 1975 image and modern one have the same stone.) Perhaps the author did not visit the house or was colorblind. 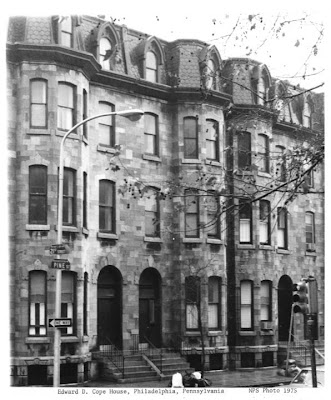 As I started to ask around, I found that no one knew what the white stone was. One person suggested that it might be Cockeysville Marble, a stone I previously wrote about for its use in the Washington Monument. An architectural historian thought that a local limestone from Montgomery County, PA, clad the structure. Both are possibilities as both were used in the area, although the Cockeysville appears to have been less popular. My trusty 1880 census of the building stone industry notes that the Montgomery limestone (actually a marble found locally within the limestone belt) was popular from the late 1700s till at least 1840 so. It was used for the U. S. Customs House and U.S. Mint, as well as for the sarcophagi of George and Martha Washington.

If anyone knows what stone was used, please let me know.

Unfortunately, failed mining ventures in New Mexico and Colorado depleted Cope’s wealth and around 1881 he mortgaged the laboratory at 2102 Pine and in 1885 leased his Pine Street residence. He and his wife moved around the corner. Cope eventually sold much of his collection to the American Museum of Natural History but as a visit near the end of his life from the artist Charles Knight reveals, the house was still full.

“Inside, everything was unique and completely dust covered. Never have I seen such a curious place—just like the kind Dickens would have loved. Piles of pamphlets rose from the floor to ceiling in every narrow hallway, leaving just enough room to squeeze by them and no more…Dust lay thick here as elsewhere, and the place was absolutely bare of furniture and hangings. No pictures, no curtains, nothing but petrified skeletons of extinct monsters…”

Cope died at home on April 12, 1897. He was 57 years old. Jane Davidson in her revisionist biography of Cope notes that the houses are now subdivided into six to eight apartments each. A sign identifying the house and Cope stands in front of the building. 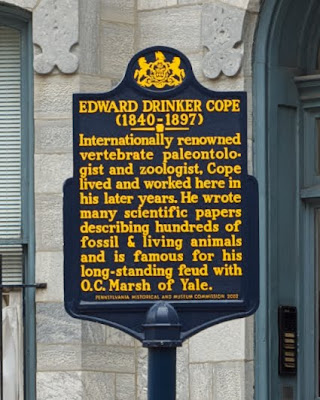