Skip to content
Tweets by geologywriter
Many people, including me, have written extensively about the famous white limestone from Indiana. In my book Stories in Stone, I call the Salem Limestone, “America’s Building Stone,” and as far as I have been able to discover, it is the only building stone used in all 50 states. Recently, however, I have learned of another white limestone often mistakenly described as Salem. Much to my pleasure, being a native of Kentucky, that other stone hails from quarries in Warren County, Kentucky, in the southwest corner of the state.

The story of the Bowling Green Oolite comes from research by Western Kentucky University geologists Mike May and Ken Kuehn. They found that the oolitic limestone was popular from the 1870s to the 1920s with the quarries shutting down around 1937. During that time it became famous for its pure white color and received a gold medal at the World’s Columbian Exposition in Chicago in 1893 and the highest award at the Louisiana Purchase Exposition (St. Louis World’s Fair) in 1904. A 1923 Kentucky Geological Survey Publication, written I am sure without any bias, described the Bowling Green rock as “The Aristocrat of all the limestones.”

The publication further noted one unusual aspect of the stone—petroleum “impregnated” the rock. Oil gave the rock a dingy and unpleasant color when first quarried and carved, but soon the evaporation of the occluded petroleum left behind a stone of “great whiteness and remarkable beauty.” And it goes without saying that Bowling Green Oolite had superior strength and durability. 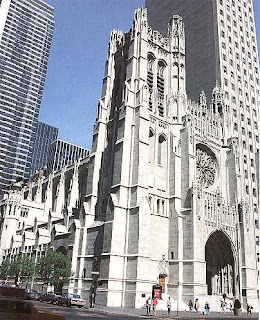 Like the Salem, the Bowling Green Oolite, formally known as the Girkin Limestone, is Mississippian in age. The Girkin is most famous as the stone where the Mammoth Caves of Kentucky formed. The stone crossed state boundaries, with structures such as the U.S. Custom’s House in Nashville, TN and the Hall of Records in Brooklyn, NY; and religious boundaries, going into Methodist, Presbyterian, Catholic, and Episcopal churches, as well as a synagogue. One of the most famous buildings is the Episcopal Church of Saint Thomas in Manhattan, finished in 1913, during the prime years for usage of white limestone from the Midwest.

I suspect that most buildings that I think of as Salem Limestone are Salem, particularly in areas in the west, but I now know that some may have been mislabeled. I look forward to finding more buildings from my home state.

2 thoughts on “Overlooked but not Forgotten”