Skip to content
Tweets by geologywriter
Continuing my exploration of building stone in New Mexico, I traveled down to Albuquerque, aka Duke City. (One quick side note, I took the new commuter train between Santa Fe and Albuquerque. The Rail Runner Express runs regularly between the two cities and is a fun way to travel.) But back to the rock in the Duke City, where I benefited from George Austin’s excellent guide book: Albuquerque downtown from a geologic point of view—A walking tour of the city center. It is published by the New Mexico Bureau of Mines and Mineral Resources in their series Scenic Trips to the Geologic Past.

I have written about Austin’s book before but this was the first time I had a chance to use it. Today I will focus on how Albuquerque architecture illustrates one of my favorite maxims about building stone geology: Even if the architecture is boring, the stone makes the building worth seeing.

For example, the AT&T building exemplifies banal architecture but the designers clad the bottom in a quite handsome pink granite from Texas. Known in the trade as the Town Mountain Granite, and informally as Fred Red (from the quarrying site, Fredricksburg), the stone is part of the extensive Llano Uplift, a 9,000 sq. km exposed section of Laurentian rocks in central Texas. Fred Red is a little over a billion years in age. On the AT&T building the slabs have both a polished and flamed finish. A flamed finish is produced by passing the stone under a plasma torch, which explodes the surface minerals to produced a textured surface. 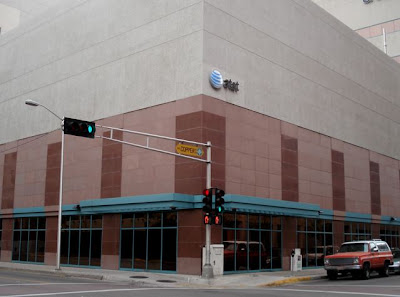 (The Fred Red and other granitic cohorts from the Llano will be addresses in the January/February 2010 GSA Bulletin. A new analysis shows that they are not A-type granites as previous workers described. Instead they formed from a continental collision between North America and “an unknown continent that left the scene before it could be identified,” according to the press release. I suspect that any information about the unknown assailant would be appreciated!

City Hall also highlights my maxim. This time the stone is a local rock, Apache Golden Vein, quarried near Belen, New Mexico. Geologists know it is as the 340-320mya Madera Formation. Fossil rich, including crinoid stems, clams, and bryozoans, the Apache also has mustard-colored styolites, which Austin notes are “post-depositional, pre-quarrying” and produced from oxydized, porous clay. Once quarried, the panels fade from weathering. 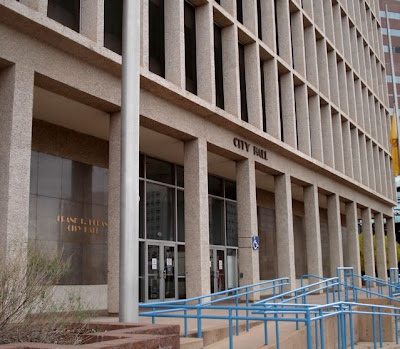 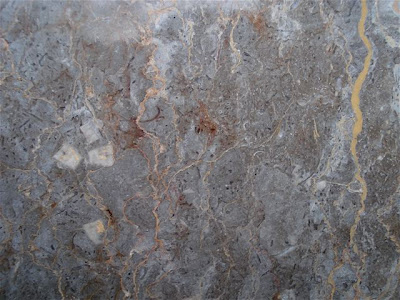 City Hall above and the nifty panels of Apache Golden Vein below.

And finally, at least on my tour de ugly, is the Bernallilo County Courthouse. Again you can find Apache Golden Vein panels, but the more numerous panels are a concrete mixed with chunks of obsidian. Austin reports that they are not local. I note them because it is so unusual to see obsidian as building stone. In fact, I don’t know of any other buildings built with obsidian. Does anyone? 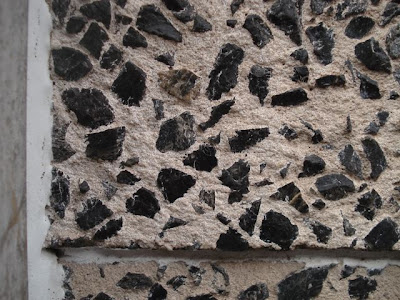 Obsidian chunks in a concrete matrix.

Later this week I will describe some of the buildings I liked not just because of their stone.

One thought on “South to Albuquerque for stone”