Skip to content
Tweets by geologywriter
Knowing my propensity for all things rocky, my writer friend David Laskin recently suggested that I pick up the book Chronicle in Stone by Ismail Kadare. The title alone titillated and the opening drew me in even more.

“It was a strange city, and seemed to have been cast up in the valley one winter’s night like some prehistoric creature that was now clawing its way up the mountainside. Everything in the city was old and made of stone, from the streets to the roofs of the sprawling age-old houses covered with grey slates like gigantic scales…While preserving human life rather awkwardly by means of its tentacles and its stony shell, the city also gave its inhabitants a good deal of trouble, along with scrapes and bruises. That was only natural, for it was a stone city and its touch was rough and cold.” 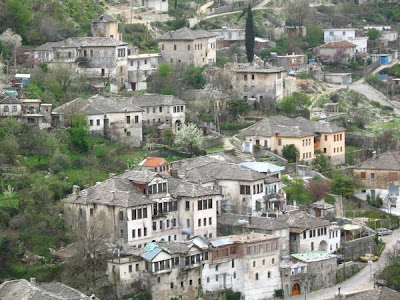 Photo of Gjirokastra by Ralf Kreuze

Told in the first person by a teenaged boy, Chronicle takes place in a small town in Albania during World War II. Both the unnamed town, based on Kadare’s birthplace and longtime home, Gjirokastra, and the unnamed narrator, endure the challenges of living amidst the vicissitudes of war. His family is forced out of their home down into their cellar, then into the town’s ancient fortress, and finally out of the town to safer parts. He loses friends and family. The town itself is shelled by the British, and invaded by the Italians, Greeks, and Germans, each of whom exert control over the people.

In many ways a fairly mundane story—the plot moves along slowly with few truly exciting moments—Chronicle is still a compelling read, in part for Kadare’s insights into his culture but more for how he gives the physical town a personality. And that persona, if you will, revolves around stone. When the German troops invade and the townspeople flee, Kadare writes “The city was evacuated. You could feel the great loneliness of the stone.”

Similar to the Stonesfield slate I described late last year, the “slate” roofs of Gjirokastra are made of limestone. According to Oliver Gilkes, a British archaeologist and adviser to the Albanian-run Gjirokastra Conservation and Development Organization, the limestone is fine-bedded, easily worked, and wide spread locally. The roofing “slates” come from the more thinly bedded parts. Initially light gray, it turns darker with aging. Thicker bedded limestone is used for building walls. (Gilkes writes that the Greek name for the town, Argyrokastron, “means ‘silver city,’ perhaps from the shimmer of wet roof tiles catching the sun after it rains.”)

Two other stones can be seen in town. The cobblestone streets use a black sandstone, which has a rougher surface. Good quarries are across the valley and in the next valley away. For decoration, a red limestone is also used.

My favorite line about stone comes after the family heads to their underground cellar to escape the British air raids. Kadare writes “No doubt about it, these were hard times for the upper floors of the city. When it was built, the wood, more sly, had had itself hoisted up top, leaving stone to the foundations, cellars, and cisterns…After giving the upper floor such privileges, the city seemed to have changed its mind, and hurried to rectify the error. It had them covered with roofs of stone, as if to establish once and for all that here stone was king.”

One thought on “Chronicle in Stone”