Skip to content
Tweets by geologywriter
On August 19, 1969, a short article appeared in the New York Times about the solving of an 85-year-old fossil legend. The story began on October 20, 1884, when workers at a small quarry near Manchester, Connecticut, discovered fossils in several blocks of brownstone. Word of the bones soon reached legendary paleontologist Othniel Charles Marsh, but before all of the fossil-rich blocks could be saved, several went into a bridge over Bigelow Brook in South Manchester. They remained there until the Connecticut highway department decided to replace the bridge, when Yale professor John Ostrom acquired the blocks and found the long lost fossils. 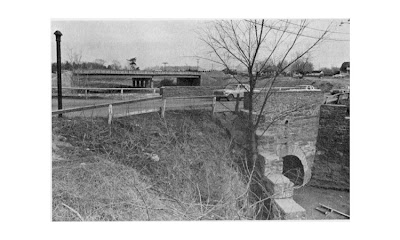 The bridge over Hop Creek at Bridge Street, now demolished. While stone for this bridge was being quarried at Buckland, dinosaurs were found.” Photo by Sylvian Ofiara in The Manchester Evening Herald. Published in A New England Pattern by William E. Buckley, 1973. Used courtesy of Manchester Historical Society

The quarry, owned by Charles O. Wolcott, pulled stone out of the Portland Formation, a 200-million-old sandstone deposited into a rift valley on the eastern margin of North America. Out of quarries of this stone in other parts of the Connecticut River Valley came most of the brownstone used in New York City and Boston. The major quarry was in Portland, Connecticut, about 15 miles southwest of Manchester. A shopping mall now covers the Wolcott quarry.

According to Marsh’s notes, the block was “half as large as an ordinary dining table.” It supposedly contained the front end of a dinosaur that Marsh initially named Anchisaurus major, which he changed to Ammosaurus in 1891. He was able to name the dinosaur from the remains of the hind end that had been found in a block saved for him. Over the next few years two other dinosaur specimens came out of the same quarry. Marsh named them Anchisaurus colorus and A. solus, in 1891 and 1892, respectively. Both also were renamed later. A colorus became Yaleosaurus and A. solus became Ammosaurus solus.

The Times article reported that Ostrom spent two years surveying more than 60 bridges in the region and finally concluded with 95% certainty that the notorious block had gone into a bridge over Hop Brook. (A study by Peter Galton in 1976 noted that there had been some confusion in the records, which lead to the search.) When news reached Ostrom about the bridge’s soon-to-happen destruction, he contacted the highway crew, which readily agreed to allow Ostrom and a crew to examine some 400 sandstone blocks over a two-day-period. Local elementary school teacher Richard Sanders found the first bone, a rib. Shortly thereafter, laboratory technician Rebekah Smith noticed a larger bone, a femur.

Over the next few years Peter Galton conducted a detailed study (Postilla 169, 1976) of all of the prosauropods (now called basal sauropodomorphs) from North America, including the new bones found in the bridge blocks. He again revised the names of the dinosaurs collected from the Wolcott quarry. Now, just two species remained, what Galton called “the slender-footed Anchisaurus polyzelus” and the “broad footed Ammosaurus major.” The rib came from Ammosaurus but the femur could not be clearly identified.

Skelton of Ammosaurus major from Galton’s 1976 study. Based on bones from Wolcott’s quarry

Galton’s study, however, did not end the confusion over the fossils from Wolcott’s quarry. In the subsequent years, various paleontologists have debated which species the bones came from. Were there two species as Galton initially concluded, or one (A. major) as Paul Sereno (Special Papers in Palaeontology 77, 261-289) concluded in 2007 or one (A. polyzelus) as Adam Yates (Palaeontology 53:4, 739-752) concluded in 2010? Clearly the legendary bones still contain a bit of mystery.