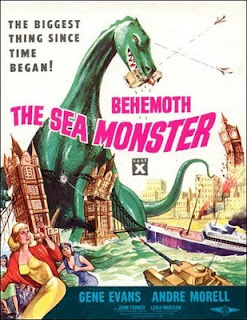 A break from building stone for a guilty pleasure. Few things are better time wasters than Cold War-period movies about radiated animals gone bad. Turning my brain off for 90 minutes or so the other day, I watched the redundantly named The Giant Behemoth, tag lined “The Biggest Thing Since Creation!” And, lordy it is! (The movie came out under several titles and taglines.)

Filmed in 1959, TGB starts with a few requisite shots of exploding atomic bombs before the resident scientist, Dr. Steve Karnes, a marine biologist, appears lecturing about bioaccumulation. “We are witnessing a biological chain reaction. A geometrical progression of deadly menace,” he warns. Well, as you might guess, Dr. Karnes is more prophetic than he realizes for just across the way in Cornwall, the deadly menace is about to claim its first victim, an old man of the sea. The cogitator dies after a blast by that ever-fatal force—mystical sounding, pulsating lights. Fortunately, he lingers just long enough to aid the movie audience with a key tidbit: “It came from the sea…behemoth. Aaaachh”

At the old man’s funeral, we get our first foreshadowing of the beast as the preacher intones from the Book of Job, verse 40. “Behold now the behemoth which I made with thee. He moveth his tail like a cedar. Out of his mouth go burning lamps. And sparks of fire leap out from the behemoth. He maketh the oceans boil like a pot. His breath kindleth coals and a flame goeth out of his mouth.” I suspect that some theologians may quibble with this exact wording of Job.

Mayhem and typical B-grade movie dialogue ensues. Finally, late in the movie, after our deadly pal has fried a dog, a boy, and his dad, we get to meet a paleontologist, who can educate us on what exactly we will see when the director reveals THE BEHEMOTH.

Our man, Dr. Samson, does not paint the best portrait of a paleontologist. He is tweedy, slightly stooped, obsequious, and a bit nervous. Plus he doesn’t seem to be very observant. During his first perusal of a photo of the footprint of Behemoth, Samson fails to notice the police car, which is dwarfed by the track. Eventually he sees the track, notes that the largest known track is 7-feet-long, and states that it was made by a Paleosaurus, but one much larger than any found previously. (The genus Paleosaurus was first proposed in 1836 by Henry Riley and Samuel Stutchbury for fossils found in limestone quarries in Clifton, Bristol; it was later found to be an invalid genus.) 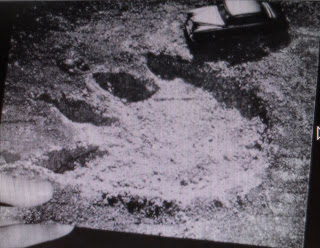 One big track of one big behemoth

Samson hypothesizes that the track maker was 150 to 200 feet long. He then launches into an explanation that would make a non-cinematic paleontologist shudder.

“Oh, it’s headed for the Thames, they always make for the freshwater rivers to die. That’s where the skeletons have been found. Some irresistible instinct to die in the shallows where they were given birth.

You know, all my life I hoped this would happen. Ever since childhood I’ve expected it. I knew these creatures were alive somewhere but I had no proof, no scientific proof. And I had to keep it to myself or my colleagues would have all laughed at me. See no form of life ceases abruptly, and all these reports of sea serpents but what can they be but the tall graceful neck of Paleosaurus. He can stay underneath the surface for an age. And now he comes to the top.

We must organize an expedition right away. What a wonderful specimen to have in the museum. Oh but it’s dreadfully dangerous. I suppose you know it’s also electric.”

Of course it is. 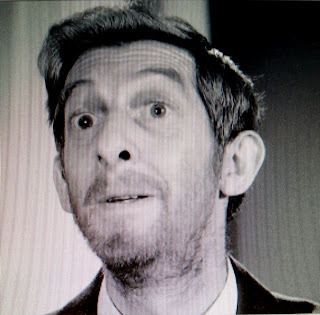 In another unrealistic portrayal of a paleontologist, we next see Samson in a helicopter stalking Behemoth. Or is Behemoth stalking Samson? Unfortunately for Samson, he and his fellow passengers succumb to the mystical sounding, pulsating lights, and the helicopter explodes in a blaze of paleontologists.

After dispensing Samson, Behemoth heads up the Thames, flips over a ferry boat, and climbs out of the river onto the streets of London to wreak havoc among the panicked citizens. Once on land, Behemoth reveals his true nature as some sort of sauropod, with the classic Apatosaurus body. Apparently satisfied with ripping out a few electrical towers, crushing cars, and disrupting the local architecture, Behemoth heads back to sea where he ultimately meets his end when Dr. Karnes blasts him with a radium tipped, submarine-fired torpedo.

Prompted by Silver Fox and inspired by Geology News, this post focuses on one of my favorite geology movies, Breaking Away.  The film takes place in Bloomington in the late 1970s and centers on four recent high school graduates: Dave, Moocher, Cyril, and Mike.  Ostensibly about the relationship between stone mill workers, or Cutters, and college kids, Breaking Away is filled with the angst and self-doubt sewn into young men who cannot follow their father’s footsteps.  “They’re gonna keep calling us “Cutters.”  To them it’s just a dirty word.  To me it’s just something else I never got a chance to be,” says Mike, the character played by a young Dennis Quaid in Breaking Away. 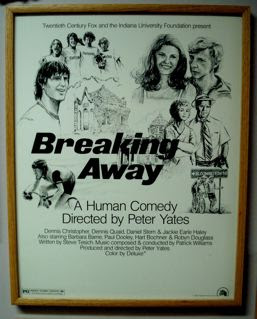 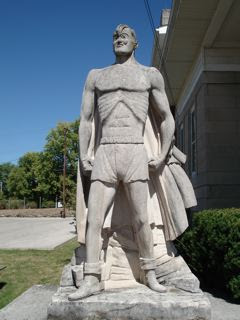 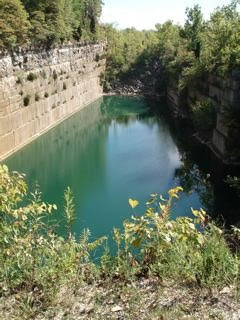