Skip to content
Tweets by geologywriter
The most famous building stone in New York after brownstone is another sandstone known by its color: bluestone. The term generally refers to flagstones quarried in the Hudson River Valley in central and south New York, as well as in northern Pennsylvania. What made it so popular was the sandstone’s ability to be split into slabs of consistent thickness, which could then be used most famously for sidewalks. 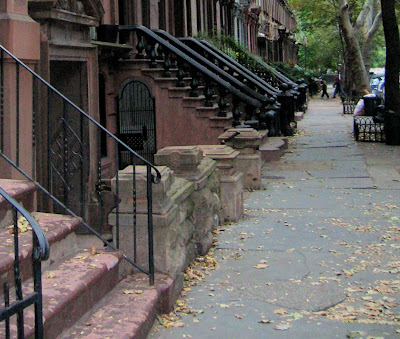 Classic bluestone sidewalk, on a street of classic brownstones in Brooklyn

Beginning in the early-1800s, numerous bluestone quarries opened to provide stone for New York city. According to the Jan 17, 1872 New York Times, one “Uncle Steve” Griffin, a “noted character,” found one of the earlier quarries while out on a rattlesnake smoking expedition near Westbrookville. The area was noted for rattlesnake dens and a local pastime was to “kill the venomous inmates [by] prying and smoking them out of their places of resort.”

Griffin had located a den and inserted his crowbar when he was “astonished by the splitting of a thin, smooth slab.” The Times added “[Uncle Steve] did not attach any importance to his discovery, merely remarking when he returned home that he had “killed more’n a thousan’ rattlesnakes, and had buried ‘em under a patent grave-stone he’d found there.” He subsequently exhibited his “patent grave-stone” to others, who at once pronounced it a blue-stone quarry.” The quarry, however, wasn’t developed for 35 years, when in 1865, six barge loads were shipped to market.

The bluestone flagging went into curbs, caps, sills, and steps—called “edge stuff”—as well as street pavement. Bluestones got their name from the blue color, though the sandstone ranges from gray to green to lilac. The quantity and type of iron controls the colors with chlorite imparting green and hematite bestowing lilac. An absence of hematite, along with unaltered iron minerals generates the famous blues.

Bluestone has also been used to describe bluish limestone, particularly in the Shenandoah Valley. Good examples of this stone are found on the James Madison University Campus. Archaeologists working at Stonehenge also refer to the igneous rocks there, such as diabase and rhyolite, as bluestone.

The majority of the quarries are in Devonian rocks. In New York the rock is the Upper Walton Formation of the West Falls Group and in Pennsylvania, this group is equivalent to the New Milford Formation. The sands were deposited in a classic delta complex, of shoreline and non-marine alluvial plains dotted with lagoons and tidal flats. Quartz is the dominant mineral with a quartz cement.

One of the best single sources on the history and geology of bluestone is a report by James Albanese and William Kelly. It was published for the New York State Geological Association meeting in 1991 and contains most of the pertinent details about the rock that I used. (It can be found in the NY Geo Assn Guidebook, vol. 63, pages 191-203.)

Although the hey-day of bluestone sidewalks passed long ago, many still recognize the beauty of the stone. For example, Marbletown, a community in the Hudson Valley, recently received $3 million in federal stimulus money to build a 3/4-mile bluestone sidewalk. Now, who says that the government does not spend our money wisely?