at the pyramids.  Okay, maybe the movie makers made a mistake but transporting tons of rock is not easy.  For example, Michelangelo narrowly escaped death twice when great columns of marble he was moving fell and almost crushed him.  Stone movement was so important that it led to what many consider the world’s first patent, granted on June 19, 1421 to Fillippo Brunelleschi.

I learned of Brunelleschi’s patent while reading Robert Clark’s new book Dark Water: Flood and Redemption in the City of Masterpieces, which tells the story of the 1966 flood that devastated Florence.  Clark begins by tracing the history of art and artists in Florence before preceding to details of the flood and its aftermath.  One of the artists he features is Brunelleschi, best known as the architect of the dome of the Duomo in Florence.

Brunelleschi’s patent covered a boat that would be used to “bring in any merchandise and load on the river Arno and any other river or water, for less money than usual.”  Not merely content with ensuring Brunelleschi’s intellectual property rights, the patent noted that if anyone attempted to build their own vessel it would be destroyed by fire.  And you can be sure it would have been; Brunelleschi was notoriously secretive and vindictive.

Known as “Il Badalone,” or the sea-going monster, the vessel wasn’t completed until 1428, when it was scheduled to carry 100 tons of marble from Pisa, 55 miles up the Arno River to Florence.  That marble had been quarried in Carrara, another 30 miles north of Pisa.  Famous as the material that allowed Augustus to boast “I found Rome a city of bricks and left it a city of marble,” Carrara marble achieved even greater fame when Michelangelo used it for his David, Pieta, and Moses.  The brilliant white marble is still widely used for sculptures and as building stone. 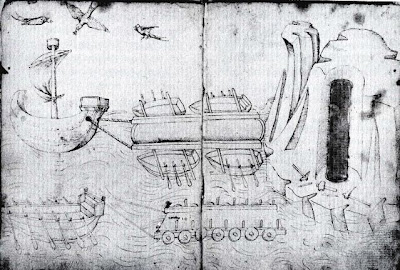 We do not know exactly how the boat was made because no detailed accounts exist.  The one drawing, by Brunelleschi’s contemporary Mariano Taccola, shows a flat-bottomed vessel getting towed upriver by another boat.  Oxen could also have been used to pull Il Badalone up the Arno.

Unfortunately for Brunelleschi, his monster boat made it only about halfway to Florence before sinking, for unknown reasons. Brunelleschi not only lost all of his marbles but also lost one-third of his wealth in the Badalone fiasco. Its failure, however, did save one life. His rival Giovanni di Prato, who had called Brunelleschi a “pit of ignorance” and a “miserable beast and imbecile,” had vowed to commit  suicide if Badalone had succeeded.  Brunelleschi eventually recovered his fortune and other boats eventually brought Carrara marble to Florence for use in the Duomo.