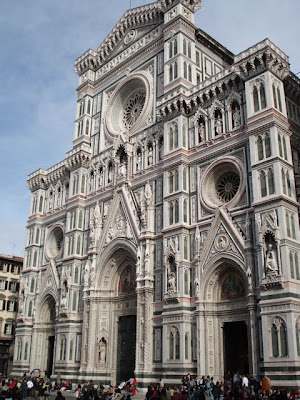 I thought I would follow up my previous post on Brunelleschi’s Il Badalone by looking at the stone used in the Duomo, or Santa Maria del Fiore, as it is officially known.  According to Ross King in his highly readible Brunelleschi’s Dome, the planners ordered three colors: verdi di Prato, marmum rubeum, and bianchi marmi—green, red, and white, respectively.  Like many writers, King refers to the stone as marble.  Only the white stone, however, is a true marble.

As the name implies, the first stone is green.  It is a serpentine, quarried for centuries near the town of Figline, a few miles from Prato, northwest of Florence. The name comes from the stone’s resemblance to a serpent’s skin, or so say some, from the stone’s use as a medicinal remedy against snake poison.  In the building trade, serpentine is commonly called Verde Antique, or Verde Antico if the seller is feeling fancy.  Serpentine forms from the metamorphism of magnesium-rich rock such as peridotite.

The red stone of the Duomo is a very fine grained limestone quarried in several locales near Florence.  It was deposited in an open, marine environment around 190 million years ago.  Geologists refer to this layer as the Rosso Ammonitico, due to the abundant ammonite fossils.

Bianchi marmi is better known as Carrara marble, the material that Brunelleschi’s Il Badalone was supposed to carry up the Arno River.  The Carrara began life as a fine-grained, calcite mud deposited in the same sea as Rosso Ammonitico but 10 million years later.   It became marble around 27 million years ago when the Corsica-Sardinian microplate rammed into the Italian peninsula.  As the plate’s basalt, gabbro, and sediments piled on the limestone, it metamorphosed it into a marble that is almost 100 percent calcite. 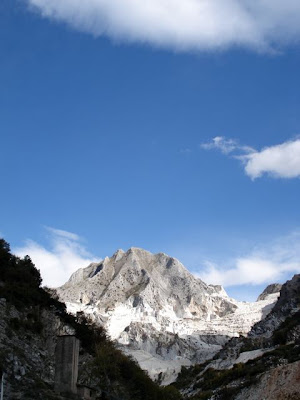 King is not alone in using the term marble to describe non-marble stone.  To the Romans, who called marble marmor, from the Greek adjective marmareos, meaning shining or shimmering, marble referred to any hard rock suitable for sculpture or architecture.  Such “marbles” might include granite, breccia, porphyry, or serpentine.  Go to any store selling architectural stone and you will find that the Roman tradition continues with a plethora of non-metamorphosed limestone labeled as “marble.”  I have no idea if any are good for snake bites.