Skip to content
Tweets by geologywriter
One of the pleasures of having a blog is corresponding with other people. Recently, Gerard Middleton, a retired sedimentologist who taught at McMaster University in Hamilton, Ontario, sent me a note about his work with building stone. Five years ago or so, a group of conservationists working on the Thompson family mansion at Ontario’s Ruthven Park National Historic Site contacted Gerard about tracking down the source of the stone used in the mansion. Like myself, he was sucked into the stories in stone. 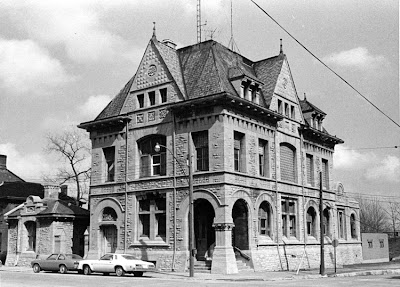 “This [his research] proved so interesting that I began to study all of the stone in buildings within a day’s drive from Hamilton, where I live,” he wrote to me. He now has an immense set of notes and photographs, part of which made it into a guidebook, he co-authored for a “Joint Assembly” of the Geological Association of Canada and the American Geophysical Union. Titled “Niagara Rocks, Building Stone, History and Wine,” the guide covers the region west of the Niagara River between lakes Ontario and Erie. Other authors are Nick Eyles, Nina Chapple, and Robert Watson. 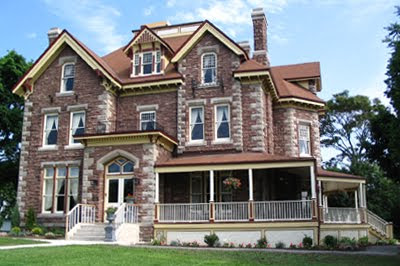 As the title implies, the guide delves into many facets ranging from settlement of Empire Loyalists in the 1790s up the development of a flourishing wine industry beginning in the 1970s. It includes sections on masons, quarry owners, the Erie and Welland canals, and geology of Niagara Falls. 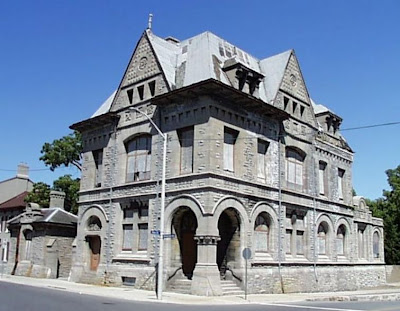 Post Office and Customs House, Queenston Stone, hard to tell but sadly the building is in very bad shape

Quarries began to be developed before 1820 with apparently some stone going into Toronto’s historic Gibraltar Point Lighthouse in 1806. Most of the quarries are in Upper Ordovician to Middle Silurian sedimentary rocks. These include the Eramosa Formation, a dolomite; the Whirlpool Formation, a white quartz sandstone; the Grimsby Sandstone; and the Gasport Formation, a crinoidal dolomitic limestone.

Although written for the joint meeting, the guidebook includes descriptions of many buildings that the field trip did not have time to visit. The stops take in a wide variety of structures, which unfortunately are not illustrated. (Logically, they figure that you can see the building right in front of you.) Fortunately, one can find a few photos on line illustrating the beautiful stone.

Like many guidebooks, it is clearly a labor of love as the authors point out their favorite sites, both geological and cultural along the way. I hope that Gerard continues to share his information with a larger audience.