Skip to content
Tweets by geologywriter
Santa Fe’s wonderful Cathedral Basilica of St. Francis of Assisi is far better known than the Courthouse. Work on it began in 1869, under direction of Bishop Jean Baptiste Lamy, made famous by Willa Cather in Death Comes for the Archbishop. Lamy laid the cornerstone on Sunday, October 10, 1869 but the following week some “heathen with infamous hands” stole it, along with its contents, including gold, silver, and copper coins and a list of donors. Perhaps the theft was a sign because problems plagued the Cathedral throughout its construction. 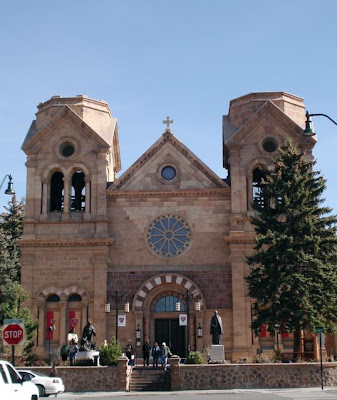 A French architect and stone cutter, Antoine Mouly, prepared the original drawings for the church from plans made by Lamy and an assistant. The building would be Romanesque in style, 200 feet long by 115 feet wide, with an 85-foot-high dome, and two towers, soaring a hundred feet tall. And it was to be built around an adobe church. Work proceeded slowly, depending on money, a problem that also led to a gradual reduction of Lamy’s grandiose plans. Mouly supervised construction until he returned to France in 1874, because of fading eyesight. He left his son, Projectus (what a great name) in charge, but little work took place for several years and he quit in 1878. 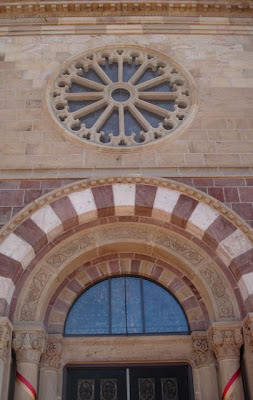 Another French architect, Francois Mallet, came over to aid the project. He made new plans, which would involve 75-foot spires topping the two towers, but apparently did not devote all his energy to design work. Instead, Mallet was putting the moves on the wife of Bishop Lamy’s nephew. The younger Lamy shot and killed Mallet on September 1, 1879. A judge found him not guilty for reasons of insanity. 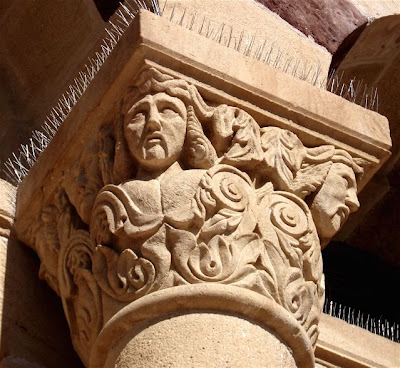 Lamy also hired French and Italian stone masons to work on his Cathedral. By 1880, the new walls had risen high enough to hide the old adobe church. Late the next year, the workers installed the beautiful circular window, cut by Vicente Digneo, Cajetano Palladino, and Michael Machebeuf (Again, I had to list there names because they are so splendid.). Money issues still delayed construction. Lamy died in 1888, seven years before the official Cathedral dedication. Mallet’s spires have never been built.

But back to geology. I have been surprised by how hard it has been to track down information on the stone. Most sources report that some material came from property owned by Bishop Lamy about 17 miles south of Santa Fe (the area is now called Lamy). Said sources disagree as to whether said stone is limestone, sandstone, or granite. The New Mexico Bureau of Geology and Mineral Resources geology map of the Galisteo quadrangle, however, indicates a sandstone quarry on Cerro Colorado, a hill rising above Lamy, in a unit known as the Diamond Trail Formation. It has been dated as early Tertiary. 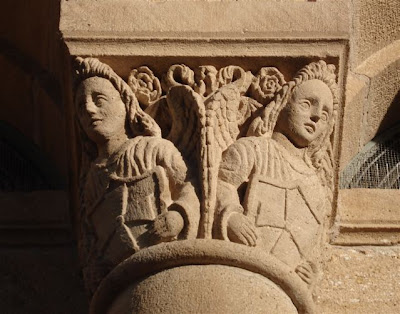 Most writers agree that a “red volcanic lava, exceedingly light” was quarried from a small mound 12 miles west of Santa Fe, known as Cerro Mogino (of which I could find no information). (One modern writer, however, referred to the stone as “volcanic tuft,” which sounds a bit like a hoodoo.) Rock, said to be an “ochreous limestone for the exterior” also came from within Santa Fe, in the Arroyo Sais.

Willa Cather also wrote about the stone. In her colorful prose, Lamy in the guise of Bishop Latour, said “It is the stone I have always wanted, and I found it quite by chance…This hill is only about fifteen miles from Santa Fe; there is an upgrade, but it is gradual. Hauling stone will be easier than I could have hoped for.” She further described the stone as “a strong golden ochre, very much like the gold of the sunlight” and “melted gold—a color that throbbed in the last rays of the sun.”

In a concluding section Cather has Bishop Latour say “Yes…that rock will do very well…Every time I come here, I like this stone better…I would rather have found that hill of yellow than have come into a fortune to spend in charity. The Cathedral is very near my heart, for many reasons.” Perhaps not the most benevolent words a bishop could utter but as many of us know stone can lead to a religious experience.